It’s common for some animals to be misidentified or mixed up with similar species. Especially when it comes to animals like elk vs moose, even seasoned wildlife watchers can find it hard to differentiate from a distance.

This is one of the reasons why every year hunters accidentally shoot moose – thinking it’s an elk.

So to avoid any confusion, this article will give a clearer understanding of an elk vs moose, the major differences, with images to support it.

Let’s start with the quick reference answer, then we’ll get into more detail.

Elk vs Moose, what’s the difference? Elks are smaller and light brown in color, with narrow, pointed antlers. A moose is large and black with flat, broad antlers. Moose have a more horse-shaped nose and skin under the neck, elks have slender snouts. Elks live in groups and avoid humans, moose are solitary animals, unafraid of humans.

Here’s a graphic representation of both elk vs moose, so you can see the visual differences, including average height (male and female) and average length… 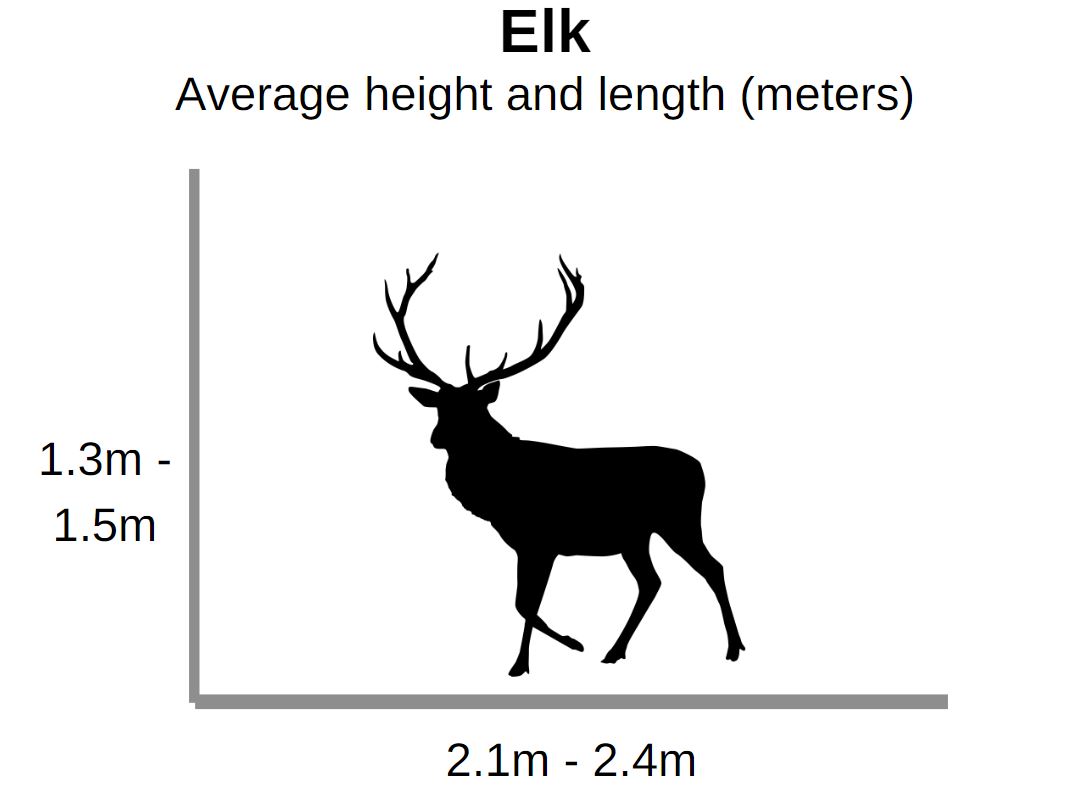 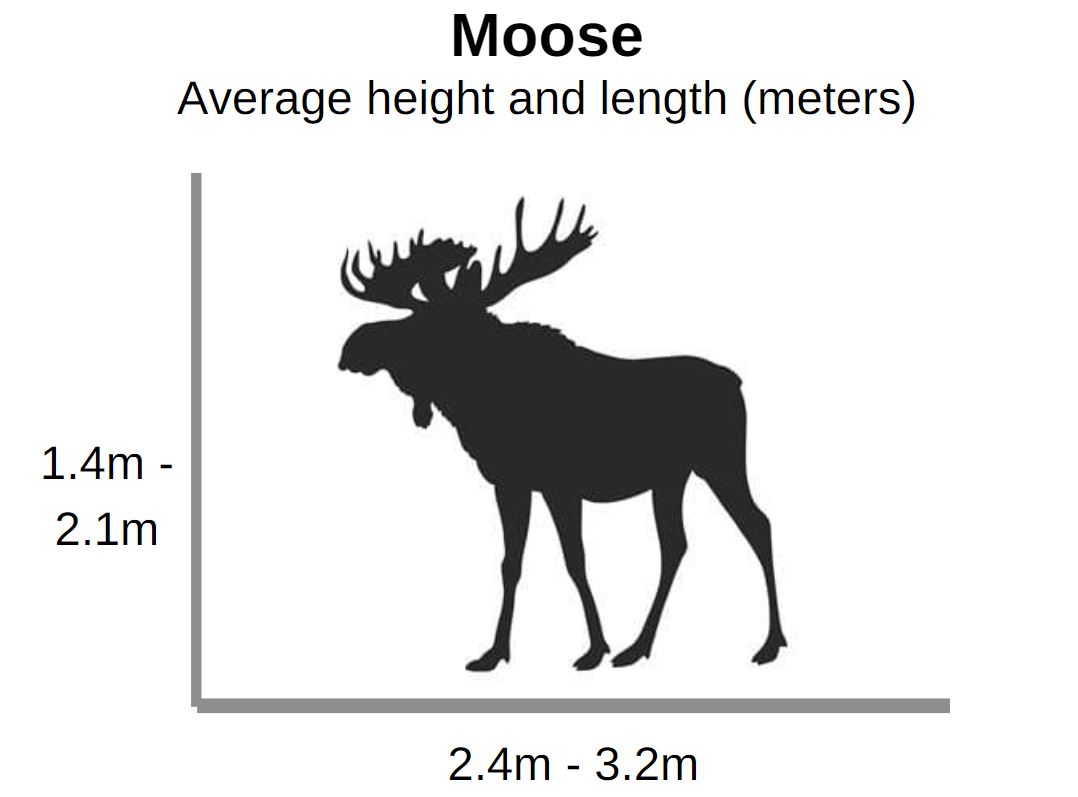 Let’s now take a look at the taxonomic differences…

Starting with the basics, most confuse elk with a moose due to their taxonomic differences.

Firstly we should state that both elk and moose are part of the same group of mammals called the Cervidae Family.

All the animals in this family, including an elk and moose, are essentially deer, but they’re known by different names.

All the animals in this family are categorized into Cervinae and Capreolinae. So let’s see what both these categorizations are – and where elk and moose fall into these categories.

This categorization of deer is known as the old world deer, although now many species live in other parts of the world.

Deers that fall into this category include:

These two deer groups are differentiated based on their bone and ankle structure.

Elks are medium-sized when compared to a moose. On average, an elk weighs about 710-730, so a bull elk weighs half that of a bull moose.

Elk has antlers that are spindly and pointed, more akin to the antlers of a deer. Elk are mostly light brown or could appear more of a golden or a pale yellow color.

The snout of an elk is narrow and it has no visible “bell” shaped skin under the neck area.

Much like deer, it’s common to see elk sprinting across the road when driving.

Moose are actually pretty large when compared to an Elk. They weigh about 840-1500 pounds on average.

The weight of a moose tends to be closer to the size of a horse. A bull moose on average weighs about 1200 pounds, which is about twice the weight of an elk.

It also has antlers that are broad and flat. However, the antlers of young moose don’t actually appear flat, making it easier to mistake it for an elk.

A moose is a mostly dark brown, which may appear black sometimes. It also has a very large, long, wide, and bulbous nose, more akin to a horse. With a visible “bell shape” under the throat.

A moose has a flap of skin called “dewlap” that hangs from the chin area.

Moose prefer to live in and around rivers and lakes and places that are abundant in aquatic vegetation and willows.

They’re less commonly seen on the eastern side of the US, especially among areas like parks and rocky mountains.

These territory patterns don’t change much over the seasons, so you should be able to see and encounter moose all year round.

These include meadows, rivers, rocky areas, foothills, and general fishing locations are all good places to find elk.

Moose is actually a more common species than elk, one good way to identify moose and elk is through their vastly different behavior when approached by humans.

Elk will actively avoid humans, and flee from people when they see them.

By huge contrast, moose don’t flee, rather they take their time, walk slowly, and calmly. This makes moose much easier to hunt than elk.

But the times when you will see a small family group of moose, are when the adult moose are escorting and caring for their young.

How hunters identify elk and moose

Many hunters identify elk and moose by examining their tracks.

This is one of the most common and easiest ways used by the hunter to distinguish an elk from a moose.

Most hunters say that the tracks of elk are around three inches wide and four-inch long. Whereas the tracks of moose are deeper and longer when compared to an elk.

Also when examining the tracks, the solitary and individual living habits of moose vs elk are more obvious.

The track marks of elk tend to show evidence of multiple tracks as the animal moves in herds, whereas for a moose it’s just track marks of one animal – possibly around 2 to 4 during mating season.

Even the bodyweight of these two animals helps to identify whose footprint they belong to.

As a moose weighs much more than elk, the larger body of a moose makes its footprints sink deeper into the soil than an elk.

In contrast, the footprints of elk tend to sink lighter on the soil. However, this depends on the type of soil and the terrain in general, it’s obviously more easily visible on wet soil or softer ground.

Even the tip of the hooves of these animals is used for identification.

Moose also have heart-shaped hooves, whereas elk has hooves that are more pointed and teeth shaped.

We’ve found the ideal resources to continue your learning at home and at school on amazon. Help support our efforts for wildlife causes and keep this site working for nature. Amazon also donates to wild-life related charities!

Perfect binoculars for any user, these foldable pocket binoculars are compact and powerful enough for kids and adults to take anywhere when observing wildlife. They get our approval for price and quality.

We hope this has provided you with the answer to the question elk vs moose. There are some obvious differences, however, from a distance, these differences can sometimes be blurred. So do check out our binocular choice above so you can correctly identify wildlife.

This content has been checked and verified by a qualified veterinary practitioner. The article has been reviewed by our editorial board and has been approved for publication in accordance with our editorial policy.

Animal speeds are often hard to capture and calculate. They can depend on a number of factors, such as wind speed, or maneuvering while at speed. But nonetheless, we have a good idea of what the top...

Continue Reading
link to Do Coyotes Eat Foxes: No, Why and What Actually Happens

So do coyotes eat foxes? You might think so given their frequently shared proximity and shared list of prey. I've researched, and written much about both foxes and coyotes. So here I'm going to...